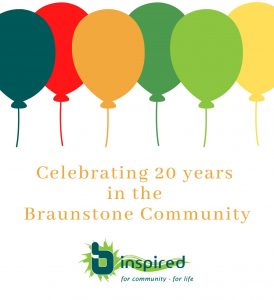 B-inspired was originally set-up in 2000 as the Braunstone Community Association (BCA) in response to the government regeneration funds that were awarded to the area under the New Deal for Communities programme.

Braunstone had been earmarked for £49.5 million pounds after being deemed as one of the 39 “worst “estates in England.  Local people came together with the City Council, Police, NHS and many other partners to create a 10 year regeneration programme for the estate.

Largescale projects took place over the following decade and resulted in over £70 million pounds of investment to the area through a variety of funds.  This created a flagship Leisure Centre, the Brite Centre Library and Council Hub, Health and Social Care Centre, The Business Box, Football pitches, housing re-furbishments and many more projects to renovate land and buildings around the area.  The scheme also invested millions of pounds into projects for local people, improving skills, increasing employment, investing in local Schools, helping to launch many local community groups and supporting volunteering.

The government funds ended in 2010 and since then the organisation has been a proud independent charity, working hard to carry on the legacy of the New Deal programme and invest in local people and places.  The charity is still lead by a majority of local people and most of its staff and volunteers are from Braunstone.

Most recently in 2019, b inspired took the transfer of the former Grove Young Peoples Centre and raised cash to convert it into a high quality Community Hub with Community Café, Bar, Dance Studio, training facilities and a 3G pitch for hire. B inspired also continues supporting local people through important services like Be-friending for Older People, a Foodbank, access to debt and welfare advice plus a range of activities and events throughout the year.

The charity planned to have a celebration event at the newly refurbished Grove to mark this important milestone but due to current restrictions, has postponed this until later in the year.

“We didn’t want to let this important milestone pass by without letting people know and thanking all those people that have helped us over the past 20 years.  There is much to celebrate and we are very proud of our achievements and despite the current circumstances, we continue to go from strength to strength.  Our focus on Braunstone and its residents has never been so important.”